President Trump’s cabinet looks pretty much as many predicted at a time when it seemed unlikely that the billionaire reality host would ever make it to be the Republican Party candidate for the post, let alone the nation’s chief executive. Packed with business types rather than politicians, and with a good smattering of generals prominent on the most hawkish side of the military elite, the US executive looks like the sort of place that billionaires and their pals go to when their dreams of world domination by other means crumble into dust. Crumble into dust is the appropriate way to talk about the economic side of capitalism as the failure to restart growth after the Great Recession of 2007/9.

As The Economist reported in its January 28th edition, the engines of the global economy – great transnational companies (TNCs) – have been afflicted with a grievous crisis of stagnant and falling profits for most of the last decade. The retreat of the global company over this period has been marked by a staggering decline in the rates of return on equity invested in international business, with 40% of the world’s biggest firms now failing to make even 10% profits on the stocks under their control – as The Economist puts it, a yardstick for underperformance.

The loss of confidence and belief in the idea that the future was global on a mega scale is a big part of the reasons why the business practices of the TNCs have fallen so sharply out of favour with the wing of capitalism that Trump and his allies represent. The long-marginalised advocates of such dusty and unfashionable sectors as coal and steel manufacturing, based in ‘the homeland’ and vying for a place in markets that are decidedly national, are once again finding their place in the sun, and President Trump’s inner-circles. This explains the enthusiasm for scrapping the rules and dispensations which had favoured international business, which have included complex regulatory regimes designed to track the movements of flows of capital and protect property rights across the globe, and tax regimes which are most efficient for those with the mobility to bank their profits in remote island havens.

Under Trump there will be a penalty inflicted on those who move assets across frontiers – excepting of course, businesses which want to repatriate the one trillion US dollars they have accumulated outside the country during the heyday of their offshore and outsourced operations. Trump’s ultra-hard line on immigration policy, which has so scandalised liberals in recent weeks, is part of the very same process which is seeing protectionist measures being brought in across the board to replace the regime which had favoured the TNCs in the recent past. Much of the discussion – and the public protests – has concentrated on the ban on admission to the US for citizens of seven mainly Muslim countries, introduced by presidential executive order at the end of January. Harsh as this has proved to be it is only one aspect of a raft of immigration control measures which will have a drastic effect on the country’s large population of settled foreign nationals. The extension of the categories of undocumented migrants who are to be considered priorities for deportation includes anyone who has broken the law by either entering or staying on in the country without permission. According to the independent Pew Research Centre, this lines up around 11 million people for removal.

Other measures will allow the federal authorities to go after the so-called ‘sanctuary cities’, where local government has pledged a degree of support and protection to people who seek to regularise their residence status in the US. Taken together, the travel bans and the pumped up deportation measures, not to mention the claims being made for a ‘great wall’ along the southern border with Mexico, represent a major threat to the USA’s historical status as a major destination for migration. Despite what is claimed by the ‘America First’ nationalists who are the dominant influence in Trump’s administration, immigration cannot be branded as a feature of the globalisation of the TNCs which they so revile. The success they have had in confabulating the movement of people with the flows of capital around the world in the search for profits is one of the reasons why Trump’s eccentric brand of politics has made inroads into the country’s working class communities.

But the United States – a country so fundamentally forged by migration over the course of its history since the days of European colonialism – cannot so easily dismiss the movement of people as a mistaken policy pursued in recent times by a now discredited section of its ruling elite.

It is far more accurate to describe the anti-immigrantism which Trump is now promoting as a determined effort to drive forward a policy that will keep the US working class divided during a period of capital restructuring; a period that will require the levels of exploitation of workers in the homeland which is currently required from the people labouring in Asia and elsewhere in its outsourced business supply chains. The world watches the brave protests which have erupted across the whole of the US in the past weeks in solidarity with the excluded citizens of the seven Muslim countries, and hopes that this is just the starting point for a militant defence of the rights of all migrants in the country, including the 11 million now threatened by their inclusion in the priority categories for deportation.

This is republished from the March/April 2017 edition of Chartist 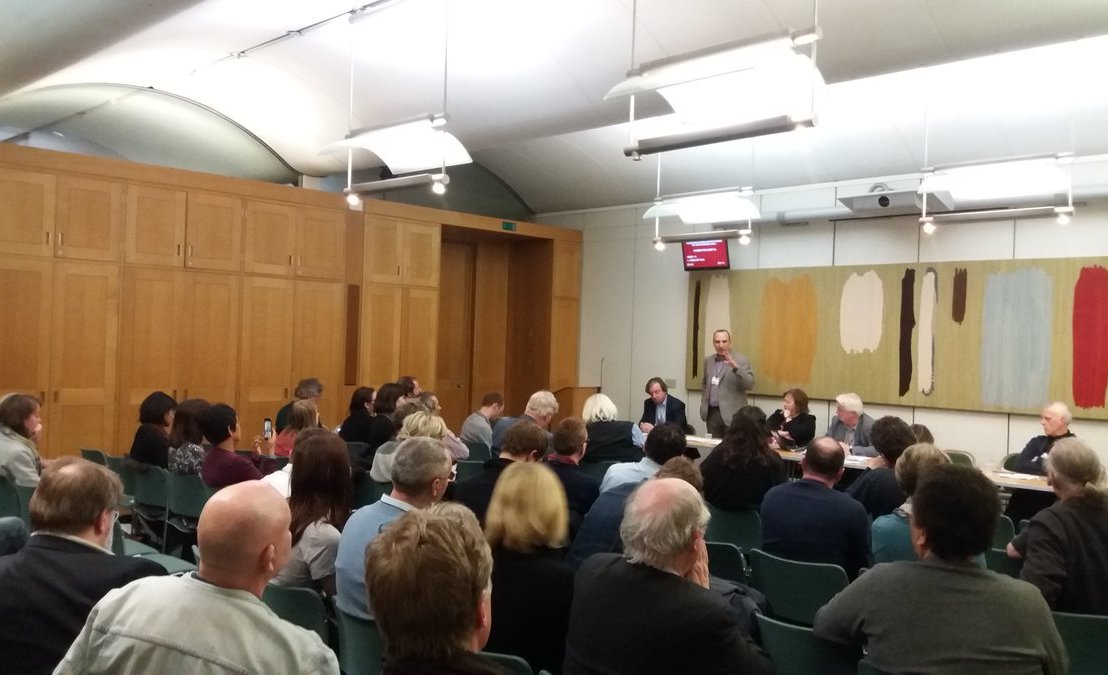 The launch of the Alliance for Free Movement (AFM) last month provided the opportunity for people involved in post-referendum initiatives to explain their campaigning work so far.

The Alliance itself has come about on the initiative of people with a lengthy history of trade union activity. They were frustrated with the fact that so much of the political establishment – both left and right – has given up on arguments about the positive role free movement of people in the EU has played over forty years.

Chairing, former deputy general secretary of the PCS, Hugh Lanning[i] opened the session by setting out how people who favour internationalism can be rallied to try to win the argument in favour of open borders while the UK negotiates Brexit in the next few years.

Green MP Caroline Lucas best summed up the challenges when she pointed out that, from the standpoint of the mass of public opinion, we have spent the last few years losing most of the crucial arguments in favour of the free movement of people. Unless we get a better sense of why this is, we will continue to be on the losing side.

For some in the audience the reason we are on the back foot is because the EU referendum mobilised nationalist and racist sentiment and this was reflected in the vote in favour of Brexit. Winning the argument on free movement was therefore completely bound up with a campaign to thwart the Article 50 process and keep Britain in the EU.

Whatever the merits of doing it this way, it also poses the danger that the arguments the newly-founded AFM wants to push about the importance of free movement will be stuck as a subordinate element in a re-run referendum campaign in which the dominate issues hinge on whether or not membership of the EU means rule by an anti-democratic, spendthrift clique of Brussels-based bureaucrats.

Many on the progressive wing will feel entirely comfortable about this, seeing that, when all is said and done 48% voted to stay in the EU in the referendum. And, they might say, it is not entirely impossible that next time round this might grow by the few extra percentage points needed.

But is difficult to feel confident that another campaign that centres on the ‘in’ or ‘out’ question will really give the AFM the space that it needed to make a radical and thoroughly progressive case for free movement. Efforts to engineer a reversal of last year’s vote will give supporters of the rights of migrants a secondary role in a new Bremain campaign at best. The likelihood is even then the leaders of such a movement would be prepared to back scrapping free movement in its current form in order to keep a toe-hold in the single market.

This task ought to be framed as ‘In or Out the EU, we call for the right of free movement.’ Winning that argument would require the AFM to break out of the comfort zone of pro-EU politics, which is currently dominated by mainstream politicians who have been quite happy to chip away at the rights of migrants of all types for years.

It would mean getting out to all the regions where dismay about migration contributed to the Brexit vote, but whose economically depressed situation has nothing to do with the arrival of new workers.

This argument needs to find allies amongst trade unionists, the people running our public services, schools and universities, and even employers who are prepared to go public and say that the most valuable asset their businesses have are its workers.

It must be developed by campaigns that have their roots in the towns and cities across the UK. And it must aim to win arguments that centre on jobs and working conditions locally, and what needs to be done to defend the NHS and other public services. The aim would be to bring together migrant community groups with representatives of all these other interests and start to make the case for an approach to migration that really benefits everyone.

Starting to win these arguments will need a willingness to move out of our comfort zones which have limited the appeal of open borders and free movement, and which has still shown little progress in breaking through to the wider population.

[i] The other platform speakers were Colin Yeo, the lawyer who runs the Free Movement legal website, the co-leader of the Green Party, Caroline Lucas, MP, Matt Carr, journalist and One Day Without Us campaigner, Christina McAnea, head of health service workers at the trade union UNISON, Roger Casale of New Europeans, and Jo Pons Laplana, an NHS trade unionist and migrant activist.

This is your very first post. Click the Edit link to modify or delete it, or start a new post. If you like, use this post to tell readers why you started this blog and what you plan to do with it.